It was time for a new journey. This time I had decided to go to the trails of Vargamäe, in other words to Järva County. I set up 3 main destinations for myself that I wanted to reach that day. These were Kodru bog, Järva-Madis and Peetri.

In previous days, I looked carefully at the weather forecast and used it to select the day: a little sunshine, moderately cold and light winds. The latter is needed to fly a drone.

I set off from Tallinn and the first destination was Kodru bog. Kodru bog is located between Tammsaare Vargamäe Museum and Järva-Madis. I approached my destination along Piibe Road.

If the drive to Jäneda was quite monotonous, then from Jäneda the road was in a thick fog, sometimes in such a dense fog that I could not even see the drive. I was looking for a place to capture this fog in the picture, but I couldn’t find any very special place. Since there is quite flat land in the area, there was nothing to bring to the fore in the picture.

I drove through Järva-Madis and then to the Vargamäe Museum in Tammsaare. The hiking trail that leads to Kodru rappa practically starts at the museum. I parked my car in the museum parking lot, took my backpack and set off. I had no plans to follow this path until the very end. I moved to a small gazebo.

On the way to the lookout tower, I took pictures from time to time.

I was there alone in the swamp, at least for the people. I was accompanied by some birds that flew over me from time to time. In addition, the voice of airplanes was heard quite often. It can even be said that there was an unusual frequency of aircraft noise. Haven’t looked, but I think the area is on a corridor.

When I reached the lookout tower, I took a short break. I flew the drone, ate some snacks I had taken with me and drank hot tea.

When the weather in the bog had been occasionally sunny, snow clouds were approaching from a distance. In a way, it made me hurry, because I also wanted to fly a drone at the churches of Järva-Madis and Järva-Peetri.

On the way back to the car, I took pictures from time to time, mainly of various small plants and trees, so-called. macro images.

When I got out of the swamp, I took some pictures of the museum buildings. In addition, I once drone the drone.

I had taken my new pride and necessary utensils with me on this trip. The meal was also included, which I could have nicely prepared using only boiled water. But what I had forgotten was the water to boil. Therefore, snow had to be used. I had chosen the parking lot of Järva-Madis church as the location of the small lunch. But I decided to take the snow with me to the museum, because I thought that the snow might be a little cleaner there. I looked for the seemingly cleanest place in the snow, scraped off the top layer and filled the dish with snow. I put a lot of it in the jar and squeezed the snow together more, because there is not much water left in the snow.

When the pictures were taken and the snow grabbed me, I set off back to Järva-Madis. The road there is amazingly good, was widely pushed out of the snow.

When I arrived in Järva-Madis, I first made a roundabout around the church, taking pictures of the ground and the air. In the meantime, a little snow had started to fall, which was indicated by the snow clouds seen earlier in the bog. Fortunately, the snowfall was not such as to prevent the drone from flying. 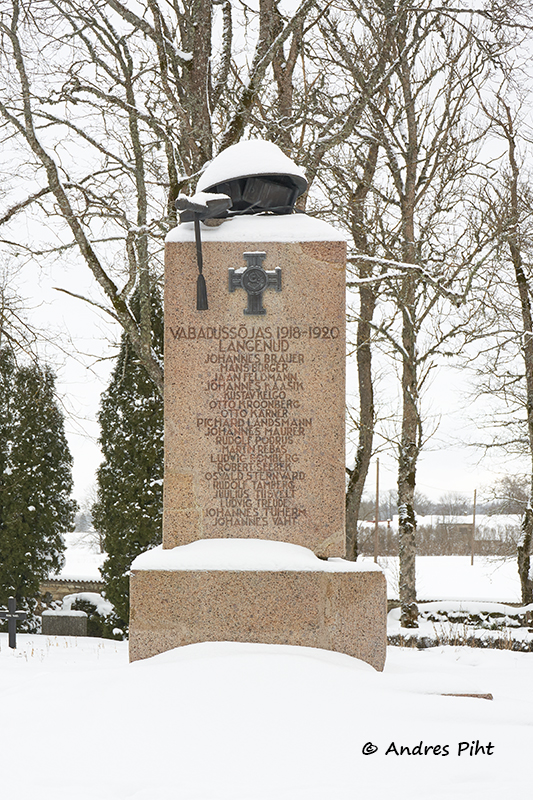 When the pictures were taken I made my new tools ready for boiling water. I poured it into my food bag and waited for the food to be ready. Wait 8 minutes. For food, I had chosen dehydrated cheese paste with mushrooms. I ate it, but I won’t buy it in the future. A matter of taste, as they say. I will choose something else in the future.

When my stomach was full, I moved on towards Järva-Peetri. It was the last destination of the day. The closer I got to Peetri village, the denser the snowfall. When I arrived, the hundreds were pretty dense, but still within the limits where I dared to let the drone fly. In addition, it was not very wet snow coming down from above.

And then the way home began. I approached Tallinn along the Tallinn-Tartu highway. The length of the hiking day was about 9 hours. It was a great snowy trip.