I started the day around 8 o’clock.

The first destination was Põltsamaa. I wanted to take pictures of Põltsamaa Church from inside. I looked up earlier that the church in Põltsamaa should be nicely opened. When I arrived, however, it became clear that the information on the Internet was not true. The church closed and a sign on the door that I was there one day before they would open the church.

Then followed the next longer drive to Põlva. In the meantime, no stops were made.

After long hours on the road I arrived at Põlva, more specifically first at Malvaste. There I planned to take pictures of some of the buildings there.

Then I drove to the town of Põlva. First to the bus station. There was the first stop in Põlva. The EDU Center, Põlva Gymnasium and an iron figure from the film Predator were captured.

Then I drove to the parking lot near Põlva Church. The car stood there for a long time, while I walked around the town. I went to the culture house and music school, in the new central square.

Next up were the church and its surroundings. Construction work was taking place around the church, but the church was open. I had never been inside Põlva Church before.

After this, I headed to Lake Põlva. There had also been a lot done since my last visit. The beach was tidy and clean. Very nice. There were neat sculptures by the beach: a rooster and a pegasus.

Then I went back to the car. There I set the drone ready to fly. And after a while it took to the air. I flew the drone over the lake, near the church and over the central square.

I brought the drone down back to me. Then packed things up and drove on, still at Põlva. Made my way to the train station. I had also written down some things to take pictures of there.

Then the road led to Põlva St. Peter’s Church and Intsikurmu Song Festival Grounds. I couldn’t get any special picture of the last place as, first of all, some children had a kind of gymnastics there and construction workers and machines were bustling right next to them.

When I reached Võru, the sun began to shine from behind the clouds from time to time. So far, the weather had been quite cloudy.

First, I headed to the bus station that needed to be photographed. 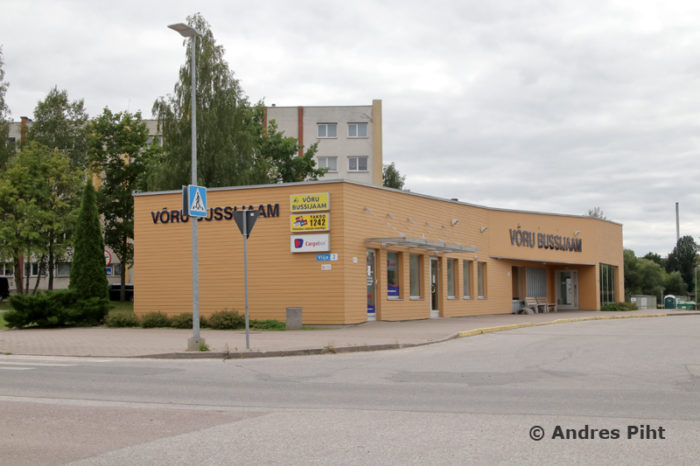 Behind the bus station, one apartment building with a nice wall painting stood out. 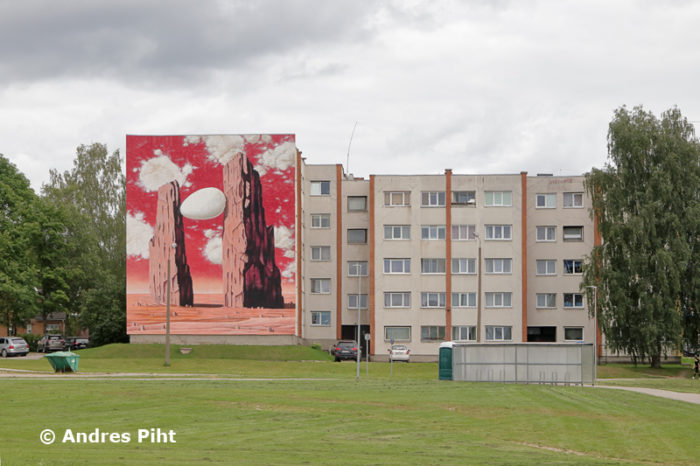 Next in line was the Võru railway station. There I wished to capture the railway station, the water tower and the memorial to the deportees. I had never seen the latter before.

Pictures were placed on the windows on both sides of the Võru railway station building.

I took pictures at the railway station and went to Võru cemetery, because I wanted to get a picture of the chapel there. To my surprise, I also found another chapel there, standing on stone stilts.

After the cemetery, the road led to the Kubija singing stage. There I took a picture of the “Hospital” bus stop and the singing stage.

And then it was the turn of downtown. I parked my car and walked to the new central square. There, serious photographing began. First with a regular camera, then with a drone. In total, it took about 45 minutes.

Now I went on along Katariina alley to Lake Tamula. Everything happened the same way there as well, first pictures with a regular camera, then with a drone.

In general, there were few people walking around in Võru. The town has become much nicer since my last visit.

At Kanepi, the goal was to make only one drone flight at the church. When I arrived, I set up the drone and in 15 minutes everything was captured.

After visiting Kanepi, a long journey to Tallinn began. I got back around 10 pm. It was a lengthy and somewhat difficult day, but the experiences were positive and I took over 300 pictures.